Disrupting the Mind of a Terrorist

We live in times of transformational change and the pace of that change is increasing. Over centuries, professional armed forces across nations have been at the forefront of these changes.

What can corporates learn from military history so that they can benefit from the concept, ‘dare to disrupt’ as a strategy? Our series, ‘Dare to Disrupt’, draws lessons for businesses using illustrations from military and counter-terrorism history. The following military illustration of Operation BLACK THUNDER is the fourth in the series authored by Maj. Gen. Moni Chandi (Retd.).

At the beginning of this series, I had discussed the generations of warfare: 1st Generation with massed armies, 2nd Generation after the advent of weapons like the machine gun and the field gun and 3rd Generation when mobility was introduced into warfare. In this part, I shall draw illustrations from counter-terrorism, which constitutes a part of 4th Generation Warfare (4GW).

Now, what is 4GW? 4GW is characterized as when the lines between war and politics are blurred and it is difficult to distinguish between non-combatants and combatants; it is when governments lose their monopoly on combat forces. In 4GW, one of the combatants is invariably a non-state actor. There are many examples of 4GW in the world today - terrorism in Kashmir, insurgency movements in the North East, Maoist violence in central India, the activities of Boko Haram in Nigeria, the Palestine movement in Israel and the US war in Afghanistan amongst others.

In 1984, a difficult situation was created in Amritsar Punjab when armed militants under the leadership of Sant Bhindranwale, occupied the Golden Temple complex. Mrs. Indira Gandhi, the PM ordered the Indian Army to clear the Temple complex, in an operation called Op BLUE STAR. A fierce battle ensued for six days, in which 83 Indian Army soldiers lost their lives and the dead bodies of 493 civilians were recovered from the debris. No one claimed victory; the Government of India was hard-pressed to explain why the armed force of the nation had been used against its’ own people and the Indian Army was embarrassed by their heavy losses and the fact that heavy weapons - artillery guns, tanks, APCs and attack helicopters - had been pressed into service.

Most tragic, the Sikh community was placed in a conflict of interest, between their traditional love for the Indian Army and their respect for the holy shrine. Nobody won, India lost! It was a time for national introspection, and the Government of India decided to raise a new force, the National Security Guard (NSG) – an armed force of the Union, specifically designed to combat terrorism. In 1986, the NSG Act was passed by Parliament. 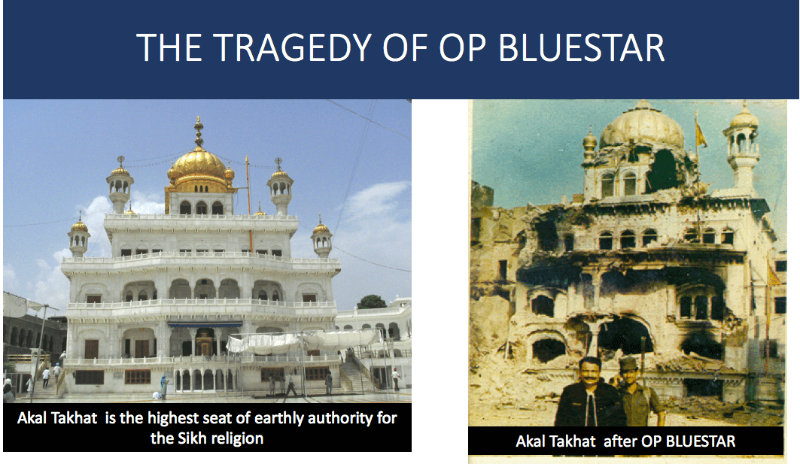 However, four years later in May 1988, armed militants again occupied the Temple Complex. The issue precipitated on 09 Apr 88, when a DIG of the CRPF was fired upon and injured by militants inside the Temple. The same day the NSG was deployed and a cordon was established around the complex.

However, unlike Op BLUE STAR, the NSG showed little haste in occupying the complex and the siege ensued. Water and electricity to the complex were cut off and NSG snipers occupied vantage points, around the complex. In the built-up area of the Temple complex, the snipers had a deadly effect. Militants, who strayed into the Parikrama were gunned down and their bodies were left to putrefy, in the searing hot weather, with temperatures reaching 43C. Without water and electricity, conditions in the complex became increasingly difficult for the militants. Punjab Police used loudspeakers to talk to the militants; explaining the futility of holding out and coaxing them to surrender. Punjab Police also identified prominent militants inside the garrisoned temple and brought their families to speak to them (on loudspeaker).

On 15 May 88, the first surrender of 151 militants took place. The balance fled to the Harmandir Sahib for a final showdown. However, three days later, on 18 May 88, the balance 66 militants also gave in.

Unlike other operations, print and visual media were given considerable access. Daily press briefings were held and as soon as the operations were concluded, a media-tour of the complex was organized. Media personnel saw first-hand, the condition of the holy shrine and the use of the temple premises, by militants. At the end of the operation, 41 militants had been killed and 217 surrendered. There were no casualties to the NSG.

In a repeat of the situation, which had resulted in Op BLUE STAR, four years earlier, the NSG was able to defuse the situation with no casualties to security forces and no material damages to the temple complex. Op BLACK THUNDER remains one of the finest examples of counter-terrorism in the world. 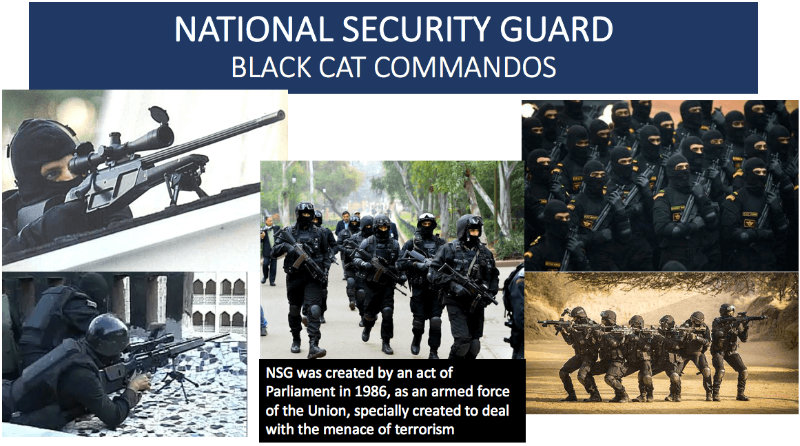 As an illustration for daring to disrupt, what lessons does OP BLACK THUNDER hold? Firstly, it was commendable that many senior political leaders accepted, that employing the Indian Armed Forces against its’ own people, in OP BLUE STAR, was a mistake. It was this acceptance that enabled the Indian Parliament to pass the NSG Act, creating the unique and special counter-terrorism force.

Secondly, the operational-decision not to launch the ground assault but to employ snipers and carry out a siege instead was laudable. Had there been a physical assault there were bound to be casualties to security forces. By employing these tactics, the operation was a complete success, without a single casualty to the Black Cats. There is a simple rule in combat.

The one who out-thinks his opponent usually wins. In Op BLACK THUNDER, the militants were completely taken by surprise by the tactics of the Black Cats.